Getting the bucks from your trucks

Getting the bucks from your trucks

In addition, fleet operations are a key driver of volume, impacting on the associated margin. Given this potential double hit on the bottom line, it is imperative that the fleet is optimised for maximum productivity.

In Partners in Performance's experience there are typically six questions that mining operations need to consider when optimising their truck fleets.

1.  Do we have the optimum number of trucks?

Determining the optimum number of trucks required to ensure full capacity and profitability means understanding demand, volumes, times, distances and routes taken. Partners in Performance has worked extensively with mining fleets to help create models and tools to manage and optimise trucking performance on a shift-by-shift basis and in the trucks for individual operators.

Parking trucks can lead to substantial savings in operating costs such as tyres, labour, maintenance and diesel. This strategy gives a higher return on operating assets.

Careful management of fleet operations by well-coached, informed shift supervisors and truck and shovel operators using the right management tools means that any cash gains from the sale of unused trucks can be locked in and performance can continue to be measured and improved on, shift by shift.

2.  How can we get more out of our operating hours?

Building the disciplines and processes of a proactive maintenance system and stopping a ‘breakdown hero’ culture is central to a reliable fleet.

Simple pre-start checks and daily services to do a quick condition assessment and check lubrication and fluids can quickly detect and remedy early issues to reduce unplanned downtime that is much more costly (both in parts and operational impact).

Reducing operating delays has been a focus for a number of years, with ideas such as hot-seating and staggered breaks now common practice.

In a recent diagnostic, Partners in Performance and the client found that 45% of operating stand-by was related to wet weather, with an average of 15 discrete events per month. Through structured workshops, solutions spring forth from the front line, usually requiring little or no CAPEX.

Sharing the findings is also important for improvement. Key lessons learned and resulting changes are disseminated at every crew shift meeting, where repeat breakdown causes are minimised or eradicated. Ensuring that these inclusive meetings are structured, using visual boards and clear initiatives, can ensure that the trucking crews remain proactively involved with improving operations.

This culture change is far more than just the implementation of a new set of tools, and requires support and coaching until people are comfortable with the new way of working.

3.  Are the trucks’ loads being optimised every time?

It is important to avoid either underloading the trucks or overloading and ‘over-weighting’ them.

A number of factors affect loading performance. For example, does the operation use weightometers on all of the trucks and loaders? How is the data used? Is the data live and consistently reliable? Most importantly, is the optimisation approach easily understood and sustained by the operators on a shift-by-shift basis?

A greater understanding of the factors affecting loading, and the effective use of visual measurement and communication tools, can drive a change of behaviour to a more proactive management of loading.

In a recent Partners in Performance engagement with an open-cut iron-ore mine, the trucking operation had been in a running debate over several years on truck loading. The argument was whether excavators should only put full buckets on trucks even if it meant trucks went out underweight or whether the excavators should make sure the trucks always left full, even if it meant the top-off buckets would not be full.

Partners in Performance coached the client in how to assess the problem using a structured value driver tree for the operation. The team found that both groups were right. When there were no trucks waiting, the extra half bucket was best, but when there were trucks waiting, the lost cycles over a shift cost more than the lost capacity. This clarity allowed operations to focus on the solution, not the problem, and increased tonnes hauled overnight.

In another recent engagement, the load factor was increased by nearly 18% over four weeks through a structured programme of coaching and reporting on truck loading. The first step was to re-educate operators on load factor using training that included simple visual guides to show ‘what good looks like’.

The second change was to update the process for loading trucks (back to front and outside in) and then have the mine manager, an ex-operator, work with the crews in the mine to apply the new process (and show obvious, visible leadership and commitment to the change).

Third and finally, the mine set up random spot checks on loads by separating a truck at random and measuring it using accurate weightometers on loaders to create a feedback process and confirm results.

4.  How can we improve cycle times?

Reducing the trucks’ cycle times, the time they take to load, haul and dump, is a key driver of trucking productivity.

One example of an improvement opportunity is in spotting. Levers can include improving spotting technique, eliminating over-trucking, improving communication between excavator and truck operators and focusing management attention on spotting.

When implementing the best practices in loading and dumping, whether in spotting or otherwise, it is essential that the correct management and reviews, and the right management tools, are in place to ensure that these best practices are followed, and then improved on.

For instance, structuring and conducting well-planned reviews with each shift’s truck and loader crews drives behaviour change and improves performance. These digger-truckie reviews can be set up to align with the weekly, monthly, annual and overall mine plan, so that improvements ideas are taken on-board and actioned on an on-going basis.

As an example, a large open-cast mine was focused on increasing the productivity of its existing fleet. It became clear that the average spot time was high. Operating rules required trucks to move into position and then reverse only once a visual reference was provided by the bucket on the excavator.

An idea from the frontline was to create a fixed visual reference on the side of the excavator that would allow them to spot while the excavator prepared and worked the face.

With risk reviews completed and the right controls in place (particularly radio confirmation of an unassisted spot), a simple ‘buggy whip’ and high visibility flag on the tracks of the excavator worked well and saved nearly a full truck from service on average.

5.  Can we benefit from automating our truck fleet?

Automating trucking operation and increasing the number of truck fleet operators can take the human factor out of the trucking process and eradicate a number of issues.

In a non-automated trucking operation, five hours of downtime is lost per truck each day on average in delays and shift changes, resulting in a significant loss of tonnage moved each day.

Other disadvantages of non-automated operations may include:

Automation does require carefully managed peripheral fleet management and site-wide wireless communications, but current development rates indicate that automation will be a viable option for most mines by the end of 2015.

6. Are our managers performing in real time?

Empowering managers through clear performance measures is critical – this can be made significantly easier by putting real-time data into the hands of the supervisors.

Scheduling and dispatch systems have advanced significantly over the past few years and now, through tablets, these systems can put information into operators’ hands, enabling them to

manage in real time. For some areas, this investment has seen productivity improvements of nearly 10%.

The investment is generally low and allows the manager to target their coaching much more effectively. Imagine being in a pit and seeing a queue of trucks waiting to be loaded. Through a tablet, a manager could call up data for the last hour to see if the queue has been the norm or a one-off ‘blip’. Based on this, the manager can then focus their coaching with the scheduling and dispatch team or with the excavator operator in a highly targeted way.

It’s not hard to make the same leap for a number of the areas discussed above such as load factor and speed; indeed, in many areas the operators can adjust themselves as they see their performance live compared with the target. 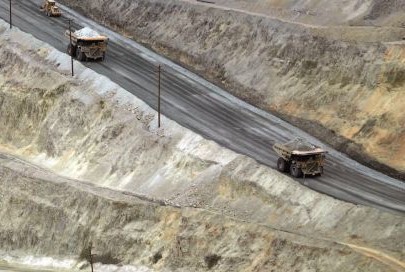